One of the more enjoyable things that I did, last week, was to cross index what I was reading about the ancient Mesopotamian empires with timeline reference books and the Bible. It's a really cool exercise, and I got a far better insight into the people and events which I had only read about in...well, let’s not go there.

Case in point: During the week, I also watched the movie, the 300. I know, you’re snickering because it’s based on a comic book; but, it is “sort of” about real events in a real time. Besides, it was fun. So cut me some slack already. I’ll admit it. I was enjoying the eye candy. However, I also happened to remember something that I hadn’t thought of for many years, and wouldn’t have now if it weren’t for the cross indexing which I’d been doing.

Did you ever wonder why Xerxes, King of the Persian Empire, went after those poor little Greeks? There is always a reason. Stop and think about it, and while you’re at it, check out the crazy costume. Think that the real Xerxes would’ve been caught dead in that get up? I don’t think so. LOL 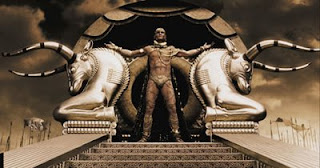 Anyway, Xerxes had the world by the tail. He had the best of everything: money, power, taxes, trade routes, taxes, people, taxes, lands, money. You get the picture. Why would he ever go half way across the world to mess with some mean, freedom loving, hairy, smelly Greek savages, who hadn’t been out of their caves for more than a few weeks by Persian standards. The Greeks had nothing which the Persians needed or even really wanted. So far, I haven’t found where history gives us sufficient reason for the wealthy, urbane Xerxes to whoop up on the Greek hillbillies. This simply never made sense to me. The economics of supplying his army, by itself, gives me a headache.

So I decided to play my favorite game, “What If?” What reason could possibly pull Xerxes out of his cities and palaces and make him go to a far off land to attack some nobodies? But first, I had to get inside Xerxes’ brain.

When I started connecting the dots from my various reference books, and linked them to what I was finding in the Bible, I came up with what I think might be a plausible reason for a potentate to suddenly travel a great distance just to beat up on a bunch of squabbling rustics.

I think that it would make a pretty good plot point for a novel.

“To be continued,” she said laughing maniacally. *VEG*
Come back for a visit, and happy reading and writing,
Frances
Writing Science Fiction Romance
Real Love in a Real Future
Posted by Frances at 4:16 PM 2 comments

Sick Computers... Life Without Them and History, Part I

First let me tell you why I've been AWOL. My computer had been giving me fits for two months; and after first consulting the phone company and having all my lines checked; then, calling the manufacturer and running tests; it was concluded that the baby had to go to the doctor. My hard drive was failing very s.l..0...w....l.....y. Good news! We got to it in time. No data was lost. I still have all of my research and my Work in Progress, undamaged.
Whatever would I do with myself while the baby was in the 'puter hospital? 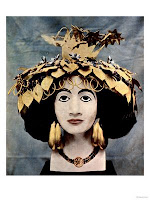 I had fun! Obviously, I worked on my research for my Science Fiction Romance WIP by studying ancient Sumer, Assyria, and Babylonia. My primary interests were their laws and customs and how I could adapt them to the alien culture which I have been creating. Did you know that they have found the world’s oldest joke book in one of the Sumerian libraries? As you can tell, I'm easily diverted. Six thousand year old jokes, from a civilization, foreign in both time and space, and humor still revolved around the digestive tract and sex. The same tasteless jokes

that eleven year olds are still telling. Who’d a thunk it? Technology changes. People don't. Or have they?
Happy imagining. Life Without Them and History, Part II coming soon. Now, I only have about a thousand e-mails to catch up on. ARRRGH!
Frances
Writing Science Fiction Romance
Real Love in a Real Future
Posted by Frances at 2:22 PM 4 comments

How Doth My Secret... Jungle Grow?

Err, ah, I meant my garden... It’s supposed to be a garden? Isn’t it?
June is the month of unbridled growth in the US Deep South and I can’t keep up with it! Never have, and probably never will. I might as well face facts. The grass is going to remain above my knees this month. Perhaps I can catch up next month.
The overwhelming color in my garden is VIRULENT JUNGLE GREEN! Of course there are other colors too. Lots of other colors! I have many aims in my garden: twelve months of bloom; gaudy color; good smell; feed the birds; feed the butterflies; and above all... be able to survive without any effort from me!
Remember that if you want to see a larger version of any of the pictures, simply click on the picture. 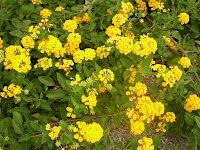 New Gold Lantana attracts butterflies and humming birds. Be careful of lantanas, because the berries are extremely poisonous. This variety has almost no berries. It was developed at Mississippi State University and exceptionally well suited to mid-latitude growing zones. It’s a good, hardy plant.

Homestead Purple Verbena also attracts butterflies and hummingbirds. Very hardy. Mow it after its first bloom and it will bloom again. 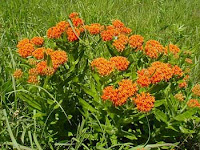 Butterfly Weed, also known as Pleurisy Root by herbalists, is... you got it... loved by butterflies and hummingbirds. Slow starter, but very hardy after established. The North American Indians used a tea from its roots as an expectorant. 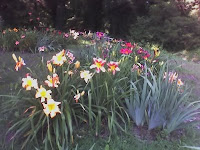 Multiple Daylilies, old fashioned orange (single and double), yellow, pink, peach, orange, bright red, deep black red, purple, and all sorts of multi-colors. With new hybridizing, they come in almost every color, are fragrant, and the band ought to play ruffles and flourishes in their honor.

Oakleaf Hydrangea, wild, all through my woods. A very large, stately shrub.

Old Fashioned, Heirloom Hydrangea, you know, the type that your great grandmother had, and were used to decorate for your grade school graduation. They can be anywhere from blue to purple to pink, depending upon how the mood strikes them. 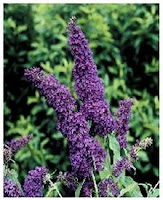 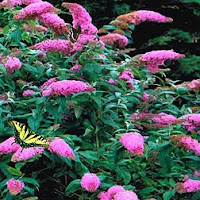 Buddleias, both pink and blue, have a wonderful, delicate fragrance, and of course... are loved by butterflies and hummingbirds. 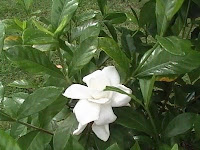 Gardenia fragrance can be almost overwhelming, so I recommend not planting them too close to the house. They can get pretty large and need pruning... which for me is a pain. However, the cuttings root easily. I love them. 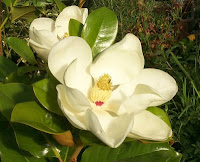 Magnolia Grandiflora, wonderful, lemony fragrance, and I just found a new tree growing on my hill this spring. Whoopee! I need all of these large evergreen trees that I can get. 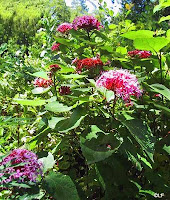 Cashmere Bouquet can be a spectacular garden THUG. It’s decided to take over one of my beds and... everyone loves it! I guess I’ll let it stay. The flowers were used for the perfume and soap which our grandmothers loved. The flowers do smell wonderful. However, don’t mess with the leaves. They stink worse than a skunk! 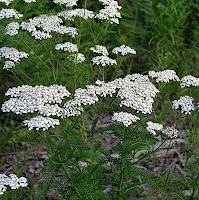 White Yarrow is a lovely white light in a deep green jungle. Before the advent of modern medicine, its leaves were used to stop bleeding.
My roommate decided to engage in biological warfare for the vegetable garden. Besides planting the garden in the patio under the bedroom window, so that the Supreme Poodle Pasha Zackery can guard it, and he has been diligent, she has planted catnip among the tomatoes, peppers and squash. Now, Her Serene Highness Maxine, the royal Harem Kitty, has taken up residence in the middle of our vegetable garden. No one, but no one is allowed to approach her catnip. Heaven help the deer this year.
After days and days of rain, it has been an absolutely gorgeous day here. I wish the same for you.
Happy gardening, happy reading, and happy writing,
Frances
Writing Science Fiction Romance
Real Love in a Real Future
Posted by Frances at 2:01 PM 9 comments

I've enjoyed the Reflection Nebula, NGC 1435, as my blog header since December. However, it's June now, and I feel the overwhelming urge to rearrange the furniture. MORE COLOR! Therefore, I'm replacing "Reflection" with the Fox Fur Nebula, from the NGC 2264 region of the Monoceros (Unicorn) constellation. Click on the picture below for a larger view. I use it as my screen saver. Thank you NASA and Hubble! 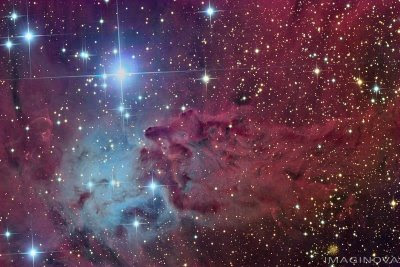 Monoceros is just to the south of Orion and Gemini, winter constellations, and just below the star Procyon (click on the Labels below the post for maps). If you decide to start looking for it, now, during the early Summer, the only way you might be able to see it is to look low in the West, for a brief time after sunset. Sorry about that!
I just decided to make the header more colorful. There are so many beautiful astronomy pictures available, so get used to change. It's the X-chromosome, ya know.
;-D
I hope that you like it. 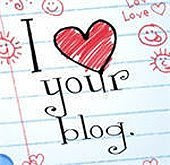 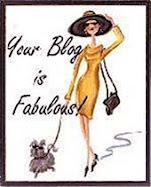